Access to certain areas of the PPSA website are for members only including the downloading and viewing order documents.

Half a Million Saved on New Pathology Managed Laboratory Service 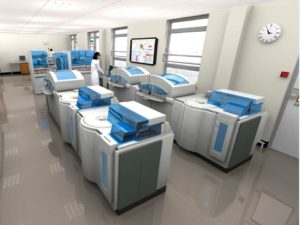 The current Managed Equipment Service contract had been in place since April 2006 and was due for renewal after exhausting all extension options.

The procurement involved 4 pathology disciplines which were split into the following lots;

The PQQ and subsequent tender responses were scored collaboratively during several evaluation meetings with both Trusts agreeing on the score for each question.

The eventual outcome was an award as follows;

As a Managed Laboratory Service contract, Roche Diagnostics Limited will manage the overall contract including the winning bidders of the other lots.

“South Devon and North Devon Trusts decided on a collaborative approach when it was time to replace their existing pathology managed laboratory service contract. Since the PPSA had a history of handling successful tenders for both sites, it was decided to use them again.

The tender was put together using key laboratory staff from each site and with Kathleen Dennis from the PPSA at the helm, went as smoothly as any tender could, with all key milestones being met. The eventual new contract was actually signed a month ahead of schedule, delivering savings, which were far in excess of expectations, even earlier for both Trusts.”